Before getting the violin, I spent some time ruminating about what to paint on it. However, I receiving the violin...

...and studying it in my hands, I began thinking about it a little differently. Should this violin, though devoid of some of its original parts, continue to have some function? From there, I had the idea of turning it into something like an altarpiece (triptych) or cabinet, and giving it the effect of having some specific function, even if it was a mysterious, seemingly lost one. After carefully breaking the violin apart, I began experimenting with various found objects and other art that would be symbolic or metaphorical as well as creating a level of interactivity so it would seem as though this violin was used for some purpose. So in the end, the viewer is an active part of the process, becoming in part an archaeologist, anthropologist, historian, or detective, searching for clues as to the nature of the piece. 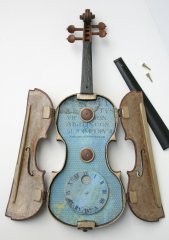 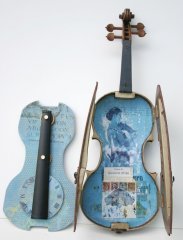 Tweet
Published in thoughts
More in this category: « symbolism of maps

Make sure you enter all the required information, indicated by an asterisk (*). HTML code is not allowed.