This painting can be purchased at SaatchiArt.com
For any other questions, please contact me.
Ask a question about this product

I often photograph the animals that appear in my work, and I saw this particular Indian elephant at a large county fair while visiting family. This elephant was there with an African elephant as well. The show, in theory, was meant to be educational. They talked about how the elephants were treated kindly and were like family. However, they still made the elephants perform the usual circus type tricks for the audience and then later charged for rides. I don't know if elephants feel emotions like sadness or hope in the same way we do, but to me, it seemed there was a kind of sadness in the eyes of this elephant. My goal in this painting was to honor the elephant's spirit, the intelligence as well as the resiliency that I also saw. 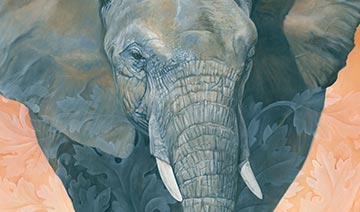